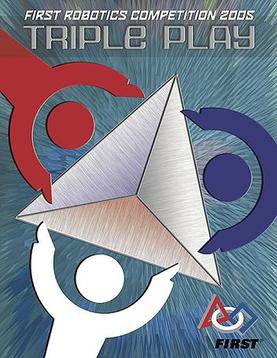 TRIPLE PLAY involved a tetrahedron shaped game piece. These hollow game pieces were scored by placing them on top of 9 goals placed evenly on the played field. Scoring was determined based on where you placed tetras. You got bonus points for making rows of 3 tetras similar to Tic-Tac-Toe. Triple Play introduced many new game concepts to FIRST® Robotics, including:

We had a spectacular robot in 2005, made evident by the fact that it carried us to the national finals! The robot was constructed entirely out of ITEM, which was an aluminum profile. The corners of the bot were three fasteners, which made it hard to work with in the pits, however, the robot had a few main mechanisms, those being the Elevator, the Arm, the Claw, and the Trident.

The Elevator of Crane Bot was powered by two CIMs and used a turned custom pulley. The Elevator also had custom braided green “Spider Wire”, which is like a fishing line. The elevator was lastly extraordinarily tall, stretching up to 23 feet.

The Crane Bot’s Arm rotated independently from the Chassis and used a Van Door Motor. The Arm could move 270 degrees in any direction, which was highly unique among the robots. There was also a Claw on the end of boom, which was pneumatically activated with a Cylinder, and it could hold two tetras at the same time. The robot also sported a Static “Mushroom”, or Trident which could carry up to 4 tetras at once. Our strategy was also very essential to our success in 2005. Our strategy was to stay in “Home Row”, and to manually load Tetras. It was also the first year of attempting to track color, which was somewhat a success.

2005 was a very successful year for Charger Robotics. Along with double qualifying for Nationals by winning Engineering Inspiration and Regional Champions, we were Division finalists at the Championships in Atlanta.