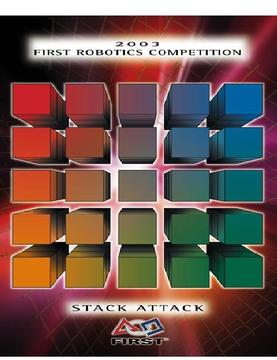 STACK ATTACK was the first year that FIRST® introduced the autonomous mode, allowing programming and software to take a lead role in scoring. 2003 was also the first year where human players were allowed to score game pieces. Two Alliances, comprised of 2 teams each, competed to stack blue storage bins up to 3 high to score points. Bins in an alliance’s scoring zone scored points for the alliance, while stacked bins multiplied the score. Robots could score bonus points by being on top of a ramp at the end of the match. An interesting field piece was the “Limbo Bar” which significantly affected the ease of access of robots around the field.

The Robot for 2003 had two main components, the Elevator and the Wings. The Elevator was powered by a winch that could raise and lower to get around the limbo bar in the field, which was equipped with Fisher Price Motors and had a PVC drum that pulled on a nylon cord. Also, the elevator contained a chain lift which is what contacted with the bins to stack them. It featured a number 35 chain with K attachments that had little hooks to lift the bins. The elevator could hold 3 bins, and stack 3 bins high.  The wings of the robot were lead screw driven, and expanded out to push and herd bins in mass quantities. The wings had polycarbonate glass on them.

The Drive Train of this robot was CIM powered and had two 6″ pneumatic wheels. The gearboxes were custom made and had 16 bolts each to allow disassemble and repair. The front two wheels on the drive train were Omni-directional, meaning they could go in any direction. This was highly uncommon at the time for robots to have.

Our third year as a team was moderately uneventful. We continued our efforts with Community Involvement and Team Spirit while not winning any major awards at the competition. However, we were allowed to keep and use many of the blue bins (the game pieces) as storage.