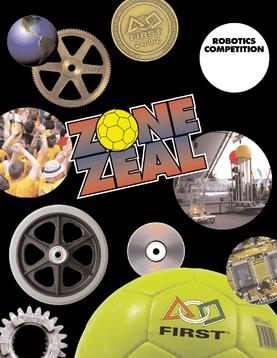 ZONE ZEAL consisted of three large movable octagonal goals placed in the center of an otherwise empty field. On either side of the field were 20 soccer balls. Human players could throw the balls onto the field for the robots to pick up. The object of the game was to collect the soccer balls, place them into the goals, and maneuver the goals into a scoring zone for your alliance. Each goal in your scoring zone was worth 10 points. Each soccer ball inside a goal in your scoring zone was worth 1 point. Each robot touching the home zone at the end of the match was worth 10 points.

In true Team 537 fashion, we decided to do everything again. Our robot could collect and deposit balls into goals, manipulate one goal, and detach a “rover” that would drive out onto the field to allow us to touch our home zone while still being attached to a goal. An interesting thing happened between regionals and nationals in 2002. We decided to change out strategy after seeing what Team 71 could do. We decided to become a forklift bot to lift the Beatty beast off the ground and pull them out of the zone. We did not complete this modification in time during championships and only had two matches where we competed as the forklift bot.

In 2002, Team 537 experienced a great deal of growth. The size of the team nearly doubled and its goals and aspirations continued to expand. The team also changed its name to “Charger Robotics” to more closely align with our school. The goals of Charger Robotics in 2002 included fostering 3 FLL teams at local middle schools, mentoring one new FIRST® team (Team 930, the Mukwonago B.E.A.R.s), and growing our presence at State Fair. The team also developed its community awareness by showing the game at the Wisconsin State Fair and starting our Annual Open House/Mini-Regional for local teams. Charger Robotics also began to show off our robot at other events such as Dozer Days, Cub Scout events, school assemblies, a UW-Madison Engineering Expo, and at the WI-FIRST® Lego League competitions.